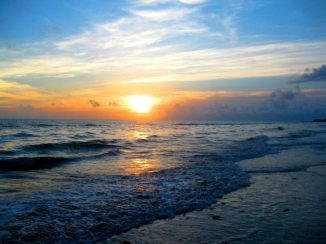 An annual summer trek to Florida is made all the more interesting when one’s trek does NOT involve children; adult or otherwise. Just two spouses. Together. Seven days.

My husband and I met and married in the throes of empty-nesting; and most of our vacations have been accompanied by various assortments of adult kids and grandkids.

We hardly know what to do with one another when we are alone.

Wait. Let me re-phrase that.

So when we set off for seven entire days at the beach, it was with a bit of trepidation on my part, but hopeful optimism that even though we were over 50 and relatively set in our ways, we might re-kindle a bit of romance bouncing in the surf. 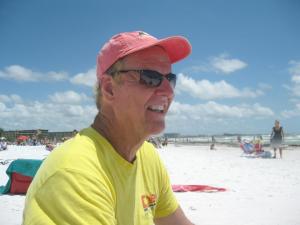 My husband, the energizer bunny.

After several intense and meaningful discussions around our individual expectations for the trip, my husband, who nodded off several times during these scintillating conversations, nonetheless brimmed with eager energy when we boarded the plane.

We’d agreed that the first day would be spent on the beach, doing nothing but playing in the water and soaking up the rays. So far, so good.

Day Two, the tug-o-war began. My husband, the energizer bunny-man; and I, the please-let-me-lay-on-the-beach-with-a-book-woman, crafted a pretty good compromise, I thought; by agreeing on morning beach time, and after lunch, an activity or two.

Or four, if the decisions is left to my husband.

So Day Two, after lunch, we head up the coast to Clearwater, not foreseeing the inevitable traffic or the older population’s driving habits (slow…and slower) . So we finally arrive in a haze of irritability, park with some difficulty due to the crowds; and visit a public beach, restaurant, and various painted dolphins standing on their tails. By the time we get back to our condo several hours later, I have just enough energy to walk out to the beach and watch the sunset. 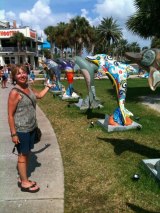 My husband suggests several restaurants, jet ski rental, a dolphin watch cruise or a quick drive to Sarasota, an hour and a half away. I look at him like he is crazy. We have been married long enough for him to correctly interpret this as: “I just laid out on the beach half a day, drove with you to Clearwater, hung out on a public beach, ate lunch at a restaurant, walked around admiring bizarro-painted dolphins standing on their tails…and you want me to DO MORE STUFF??? SERIOUSLY?? Without even a hint of an argument, he says “Umm, okay, let’s just stay in tonight.”

I think this means our marriage is progressing nicely. There was a time when he would have no clue why I had that irritated look on my face, and a marathon discussion would ensue. At least we are becoming more efficient with our communication.

Day Three arrives, and I ask if we can stay in and lay on the beach all day; with a few breaks for lunch in the condo. He gives me his long-suffering look, which I correctly interpret as: “What are you TALKING about? We fly all the way to Tampa, rent a car, drive to the beach; are surrounded by tons of cool stuff to do, which I have listed in an organized and obvious manner, and you want to STAY ON THE BEACH? SERIOUSLY?” END_OF_DOCUMENT_TOKEN_TO_BE_REPLACED

I don’t know what it is about babies that turn me into an absolute, charm-curdled, gooey, mushmouth. A scant 10 years ago, I would have slit my wrists before saying something as sickeningly sweet as “Ooooh, aren’t you a tweet wittle girl?” or “Gigi loves you. Can you say Gigi? Gigi? No? Say Gigi!!” or “Look at those toes! Who painted those itty-bitty wittle toes?”

My grandbaby, Sophia, reduces me to mono-syllabic, unintelligible wads of baby language that I did not even know I could pull out of my brain. One look at those sweet blue eyes fringed with golden lashes, carrot-colored curls and chubby fingers pointing at everything in sight, and my hard-earned vocabulary stalks right out the front door as I cheerfully identify stuff in terms a baby can mimic. After all, an 18-month old child cannot say things like “butterfly,” but she can say “bu.” So, in an entranced attempt to communicate, I found myself forming entire sentences like this: “Dog foot hat.” “Tree leaf green.” “Bug tomato – oops, she cannot say tomato, ummm…bug RED BALL.” With sentences like these, I am consistently rewarded with toddler smiles and giggles and adorable baby expressions.

Man. Talk about leaving one’s rapier-sharp wit shredded to bits on the floor of the Pack ‘n Play.

Not only that, but I have entered the time warp between adult children flying the coop and grandbabies flapping around the empty nest. It is surreal, somehow. Reminiscent of my agonizing, sleep-deprived, young-motherhood days; but lacking the youth and energy I remember during those midnight feedings and poop patrol (diaper changing, for those of you uninitiated in baby-care terminology).

I had four of the little rascals, (translation: exhausted); so when they flew the coop, I waved a vigorous good-bye with nary a thought to the baby boomerang that was sure to come.

Not only have the progeny of the rascals begun to return, one of my daughters is marrying a man with a built-in three-year old; so my grandchildren are MULTIPLYING by virtue of cultural exponentials; a fearful development.

What if I end up with something like 24 grandchildren??? How will I find the time to coo and heave mono-syllabic conversations at them all? How will I remember their birthdays? What if my adult kids (heaven forbid) divorce, and re-marry, thus dragging entire new throngs of step-grandchildren along with them? What if I forget their names or get them mixed up?

But I am getting ahead of myself.

I have found thus far that I am really, really good with one infant in the house. I am moderately cool with one older grandchild and one infant. I am really, really stressed out and witchy with two infants in the house, and let’s not  think about what would happen to my attitude (not to mention my verbiage) if I had three infants in the house. Or even two infants and a toddler. Or, horror of horrors, two toddlers, two infants and a newborn. The possibilities for self-implosion are infinite.

I do not even want to consider it.

The past three days, I had one adult child and one toddler, less one husband who was working

out of town. A groovy combination. I felt no pressure to be attentive to the husband, or keep the house quiet, peaceful and orderly. I had loads of time to heap sweet and sappy phraseology upon the 18-month old, and was sufficiently energized to sneakily teach the toddler rather lamentable words, which alternately horrified and delighted her mother, my oldest daughter.

When my daughter arrived, her precious Sophia in tow, I was thrilled to discover she now is somewhat able to communicate. For instance, “flower” is “flou,” diaper is “di,” “ball” is “bo,” “Gigi” is “Eeee,” “Mama” is “Ma-mo.” The language of toddlers delights me. I could listen to it for hours. The cat is “Maow.” It isn’t, “Where is the kitty, Gigi?”; it is scrunched-up-face, perplexed eyes and a one-word question: “Maow?” I understood her completely, which rather distressed me, but I believe my brain will rebound in a few days.

It was with this fond and grandmotherly mindset that I proceeded to add to her verbal repertoire. Overcome with an inexplicable evil desire to hasten the inevitable march toward the “terrible two’s,” I grabbed one of her stuffed, talking animals, clutched it to my chest, gazed deeply into her sea-blue eyes rimmed with the lightest gold eyelashes; and said “My.”
Her eyes flashed with understanding. Immediately. It was remarkable. She quickly snatched the animal from my hands, clutched it to her tiny chest, and intoned “MY.” 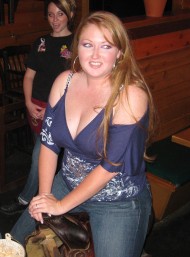 I had never seen my daughter’s head snap around so quickly. “MOM!” I blinked my eyes rapidly at her, forced my lips from a smile into a straight line, and replied innocently, “What?”
“You know what!! We hoped it would be a while before she got that concept! What are you doing??”

I considered this and slanted my eyes at her. Grandmothers should be allowed a bit of payback at their adult children’s expense, shouldn’t they?

Of course they should.

So, after my daughter settled down a bit, and behind her back, I reinforced the “my” concept a few more times. I soon tired of this, as Sophia caught on so quickly it was unnecessary to drill her. I then decided that any self-respecting baby should at least be taught a few creative ways to let her parents know her diaper needs changing.

I tucked my little Sophia in my lap and whispered gently in her ear a universally acknowledged two-syllable word: “poo-poo.”

And just like that, Sophia picked it up. Her brilliance is amazing. “Poo-poo!” she yelled proudly. I was not sure she grasped the concept that this word might be used to indicate a dirty diaper, but nonetheless, she appeared delighted that she could repeat these sounds perfectly with little effort.

Her mother’s mouth dropped open in unbelief. This time it took a few seconds for her to get anything out. “Seriously? Seriously, Mom? Are you kidding me? Poo-poo? Oh my gosh.” She grabbed Sophia in disgust. “Do you know how hard we have worked for her NOT to say that? 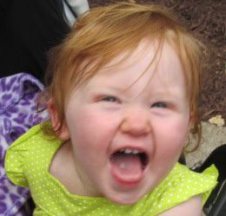 I  am temporarily disheartened. Then I look at the baby and whisper “poo-poo.” She grins wickedly and shrieks, “Poo! POO!” Her mother’s shoulders slump. She slices her eyes toward me and risks a smile. Then a laugh. Then a belly laugh.

Soon, we are cackling like two hens in a cage full of roosters. Our sides are heaving, and tears are rolling from our eyes; breathless with hilarity. Sophia, who loves laughter, mocks us with baby-cackling sounds which try, but fail, to actually sound like laughter, which causes us to crack up even more. The more we laugh, the more she imitates us, her eyes crinkled in amusement; her tiny, perfect, white teeth gleaming from the smile splitting her chubby pink cheeks.

The funny episode dropped from our minds later that evening as we fixed a great dinner, watched movies, played with the baby and talked. I decided not to push my daughter over the edge, and backed off on teaching Sophia brat-worthy responses. It was just a bit of fun, and I didn’t really think Sophia would sustain lasting impressions. 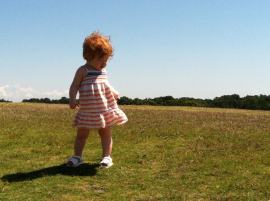 The morning my daughter was getting ready to leave, I was given the task of entertaining Sophia while she packed to leave. I walked the baby around the yard, showed her birds, pointed out butterflies, picked up the beleaguered cat and sat it on my lap so she could kiss it good-bye (“Bye, maow.” Pat, pat, Grip. Squeeze. “Bye, maow.” Cat makes frantic dash off my lap to hide.) When everything was packed, I plopped Sophia in her car seat and her mom and I buckled her up. I kissed her all over her face and told her bye-bye.

She gazed at me with earnest blue eyes and solemnly whispered, “Poo. Poo.”