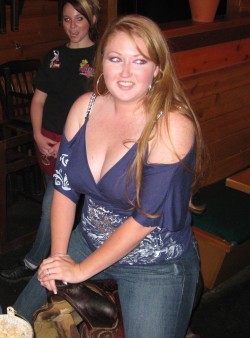 My sweet daughter in the "bachelorette party saddle" at a restaurant

What has a plunging neckline, shoulder-dangling earrings, skin-tight jeans, French-manicured fingers and toes; a cocktail in one hand and a karaoke songbook in the other?

Answer: my oldest daughter at her bachelorette party the night before her wedding.

I was honored to be included among my daughter’s best friends as she enjoyed her final swan song as a single. I am completely out of touch with the twenty-something bar scene, and for that I am grateful. It seems to include a little too much flesh on display, which is alternately covered with tattoos or jewelry.

No bachelorette party these days is complete without karaoke, I was informed. My daughter is an amazing vocalist, and as I watched her perform I was very proud. I screamed my guts out and applauded wildly along with the rest of the gang.

I had mixed feelings as I watched her kick back a celebratory shot of something brown with whipped cream — I am out of touch with what young people kick back these days. My daughter doesn’t drink much — a little wine — but that night, people were buying her drinks all around and I watched an interesting assortment of pink, fruity, fluffy stuff pass her lips. We all yelled and toasted each other repeatedly.

It was interesting for me to watch her against this backdrop, my mom-mode switch in neutral. This was a young and confident adult, celebrating her upcoming wedding with other young and 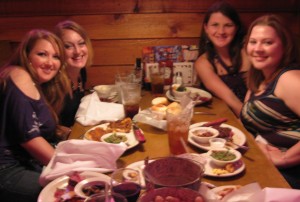 confident adults. I did my best to ignore the cigarette smoke, thumping music, tattoos, body piercings and ridiculously short skirts that populated the bar.

In my ‘disco queen’ days, we smoked cigarettes, listened to thumping music, wore ridiculously short skirts and pierced our ears. I sense some similarities here.

Fortunately, I have outgrown this stage. Now I listen to calmer music and wear a lot of plaid capris. I don’t smoke or tattoo anything. My skirts are a sensible length.

It feels strange to be on the outside looking in – a student of my daughter’s generation. I observe her healthy, robust interaction with her friends, all of whom seem to respect and delight in her. I resist my desire to rush over to her décolletage and jerk up her neckline to a more modest level. We are on her turf, not mine. There are lines that mothers should not cross.

She introduces me proudly to everyone, and I push aside the nagging feeling that I do not belong, because in truth, I do belong.

I was invited. She is my daughter, and I am celebrating this milestone with her. So what if everyone is a good 30 years younger than me? I look okay when the lights are down low. 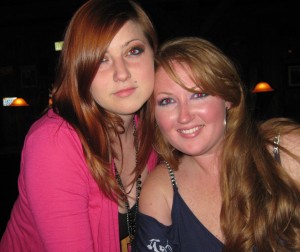 My two daughters during the party after throwing strange-looking beverages down their throats...

My other daughter, barely 21, arrives at the party after her work shift ends. She slices her eyes toward me as she takes deep drags from her cigarette and hoists a brew.

She grins, daring me to comment. I am outnumbered. I feel the torch being ripped from my stiff, unyielding fingers, and I don’t know if I like it.

This whole mother-of-the-bride thing is confusing. On one hand, I am delighted. On the other, I am depressed. I have no control whatsoever in this situation. I peer through the smoke-induced haze, wondering how they can breathe, let alone enjoy a conversation. When the group moved to the next agenda item, I begged a ride home and left early.

I was not overly interested in watching my daughter ride a bull.

The wedding was on the beach the following day at sunset; lovely and romantic. I’m transitioning from mother-of-the-bride to eventual mother-of-the-next-bride, where I plan to be better prepared emotionally to deal with flashbacks of adorable little girls, first dates, volleyball games, prom dresses and graduations superimposed over chortling, wild-eyed, microphone-wielding karaoke and bull-riding enthusiasts with French manicures.

Isn’t there a rule somewhere that mothers should gracefully decline an invitation to their daughters’ bachelorette parties?